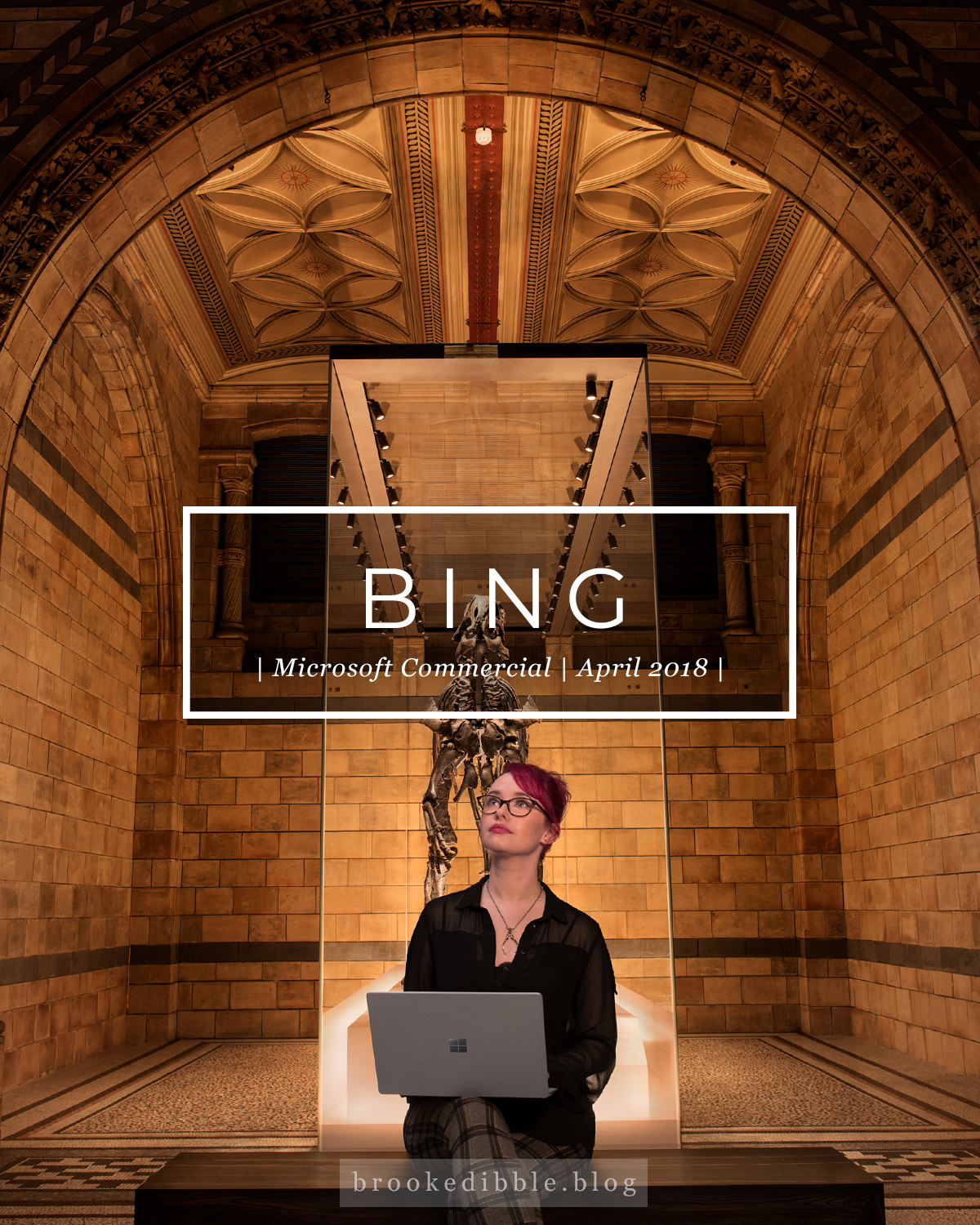 Soooooo, i’ve been getting a lot of messages about being spotted on friends’/family’s televisions 😛

Four weeks ago, the Bing commercial I was in aired (below for your viewing enjoyment…!)

EDIT of the EDIT: … the video below has had almost FOUR MILLION VIEWS. THAT IS A LOT OF VIEWS, YOUTUBE!!! It was a TV commercial, on the television… and yet youtube has almost 4m views!? :O

It was an incredible experience to film in one of my favourite places (London’s Natural History Museum) late at night with no one else around bar the crew! I’ve been a member there for a while, so it was fantastic to be let loose in a real life ‘Night At The Museum’  (sadly/probably fortunately nothing came to life at the time…)

There was one point when we were shooting through the giant fish tank where I was thinking ‘well, this is a bit cool isn’t it’ and had a moment of nerdy excitement…

I actually wasn’t told about any of the new Bing features until the moment of shooting it so that they could record my genuine reactions – and I genuinely was impressed!

The visual/image search was super cool – you are able to zoom in on an image and instantly see similar images related to that area of the image (i.e, zoom in on a shoe in a fashion photo and it brings up more images related to that shoe) I got very excited about that! I spend a LOT of time (work or otherwise) researching images, so I really enjoy the idea of zooming in on something such as a lizard and finding related colours, patterns, textures etc. Interestingly, it comes up with visually similar things like textiles and other avenues you might not have immediately considered.
You can also save images for later, which will be useful for creating mood boards on the fly… or remembering which shoes I liked from where 😉

The Q&A feature was an interesting one too – being given two differing opinions in answer to a question is refreshing, as opposed to opinion presented as outright fact. It still gives factual answers where appropriate, but in the context of something along the lines of ‘did dinosaurs have feathers’, it gives two sides of the argument to inform your own decision/thoughts.

Additionally, on Tuesday 20th March the lovely Brian Kealy (Head of International Consumer Marketing) and myself did a talk at AdWeek Europe, discussing Bing’s features and the merits of squares and triangles, and whether giraffes are going to take over the world… Feel free to have a watch if you want to know a bit more about what I do work-wise and a more in-depth look at Bing itself.

Overall, I’m really thrilled to be involved with the campaign and am personally very excited about making full use of these new features!

Huge thanks to the lovely teams at Microsoft and McCann <3

(In response to several enquiries, YES I did make all the jewellery i’m wearing 😉 It felt appropriate…)

12thJan20 - process breakdown for anyone intereste

The first key I designed and made years ago for my

One of the first rings I designed and made (and st

A #skullring I designed and made for my long negle